We have seen in news of late that there are two Americans returning to the United States in Atlanta, GA from West Africa.

The reason that this is newsworthy is because they are sick with the ebola virus.

What Is The Ebola Virus?

The ebola virus is a virus that is often fatal and it is marked by very distinct symptoms. (Please note that the distinct symptoms appear later on as the virus progresses, not immediately.)

It starts out with flulike symptoms. However, as time progresses, the symptoms gradually get worse.

How Is Ebola Spread?

Ebola is not known to infect people through the air. I am well aware of studies that have purportedly been conducted that say that it spread from pigs to primates in captivity. This does not mean it will infect humans through the air and, while pigs are carriers, for humans to become infected, direct contact has to be made with the pig that is infected, an infected animal, or another human that is infected.

Ebola is spread through direct contact with an infected person or animal- or contact with their bodily fluids, which does include spit, phlegm, etc., is the theory from researchers.

How Is It Contained?

Hospitals follow protocol from the CDC on matters of keeping germs such as the ebola virus contained.

The guidelines from the CDC concerning how to handle this virus and to effectively care for a patient with the virus are as reported by NPR:

If there is a large amount of blood or other body fluids, personnel may also be told to wear double sets of gloves, shoe covers or leg covers.

The hospital that the two doctors will be at during the duration of their treatment, has a special wing designed for this very type of emergency.

And, according to Dr. William Schaffner, almost any American hospital is equipped to handle this here in the United States. 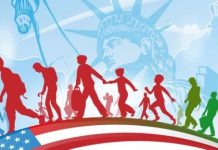 The Supreme Court Just Put Immigrants In the Crosshairs–Again (Video)