Six months ago, Hurricane Maria ravaged Puerto Rico in the worst disaster ever to hit the small Caribbean island.

In those six months little has changed. The Federal Emergency Management Agency (FEMA) is still distributing food and water in what has been characterized the “largest federal response to a disaster” in American history. The Army Corps of Engineers is still cleaning up debris and installing roofs.

In some respects the conditions are even worse.

Questionable contractors have descended on the island; running water is scarce; there aren’t enough federal responders; Washington has delivered only $15.8 billion of the estimated $94 billion required; electricity has not been fully restored; homelessness has exploded; and over 250,000 people have fled for the mainland.

From November 2017 through January 2018, Puerto Rico’s Department of Health crisis hotline received 3,050 calls from those who reported to have attempted suicide–a 246 percent increase from the same time last year. More have called to report suicidal thoughts.

Last year’s suicide rate was the highest since 2013, with men and older individuals the most likely to commit it.

“Before Maria, there was a marked deterioration due to the high level of unemployment, loss of homes and foreclosures, violence linked to unemployment and loss of opportunities. Those conditions that guarantee the emotional health of the people were disappearing. It’s normal for there to be family conflicts, but when you add the stress of more than five months without power, without food, living patterns change…it makes it harder for people to manage daily life.”

The Puerto Rican government states 93 percent of the population has electricity again; however, according to El Nuevo Día, four mayors dispute this claim, accusing the utility company of inflating the figures.

Dozens of schools, for example, still make due without power. According to an Oxfam report:

“These schools often run on generators, which results in teachers holding classes for only four hours in the morning due to fuel costs, instead of the usual seven hours per school day.”

For those planning on staying on the island, FEMA has approved less than 40 percent of one million applications for home repair financial assistance. This is partly due to FEMA requirements for homeowners to produce proof of home ownership to qualify for assistance, and many Puerto Ricans do not possess deeds to their homes. In rural areas, home buying is frequently transacted verbally or via handshakes.

But hundreds of thousands have decided to move.

According to the Florida Division of Emergency Management, more than 269,000 people have arrived in Florida via airplane. The Center for Puerto Rican Studies at the City University of New York estimates Puerto Rico will jettison about 14 percent of the population–470,335 people by the end of next year. Demographers believe up to 82,000 people a year will relocate to Florida. In the past three months, more than 10,000 Puerto Rican children have enrolled in Florida’s public schools.

When President Trump visited the island on October 3, he congratulated Gov. Rosselló for the low death count of six. That number is now officially up to 64, however challenged.

“We decided to compare what the government has been saying with other reports of deaths from the ground. We searched Google News for reports of deaths in English and Spanish media from Puerto Rico since Hurricane Maria. We found reports of a total of 81 deaths linked directly or indirectly to the hurricane. Of those, 45 were the deaths certified by the government. The remaining 36 deaths were confirmed by local public officials or funeral directors, according to the reports. We also found another 450 reported deaths, most of causes still unknown, and reports of at least 69 people still missing.”

Data indicates the real death toll could be over 1,000.

‘The Former Guy”s Concentration Camps Are Still Open Under Biden 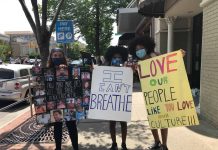