Then Saturday’s chemical strike in a rebel-held Damascus suburb, killing at least 42 people, motivated Trump to perform a volte-face in which he finally had no choice but criticize Russian president Vladimir Putin, tweeting:

All this coincides with the first week of war hawk, John Bolton, who replaced H.R. McMaster last month as National Security Adviser.

Bolton will be sworn in today amid escalating tensions with Syria, North Korea, and Iran.

If you want to know why that should concern us, read on.

Bolton first gained worldwide attention during the George W. Bush administration, when as UN envoy, he advocated military force as a means to promote U.S. goals around the globe, including the 2003 Iraq invasion.

He maintains that approach for dealing with North Korea and Iran, making him another member of the Trump administration to favor military intervention over diplomacy.

In February, Bolton published a commentary arguing for a first strike against North Korea, citing nuclear weapons and long-range missiles as posing an imminent threat. He rejects the claim North Korea can be contained and deterred.

Bolton dubbed Donald Trump’s inflammatory speech to the United Nation in September “the best speech of the Trump presidency.”

He is a conspiracy theorist who claimed on Fox News the Democratic National Committee (DNC) hacking was a “false flag operation” intended to falsely implicate Russia, and that supporters of Democratic presidential candidate Sen. Bernie Sanders (I-Vt.) were actually responsible for it.

Remember Benghazi? Bolton weighed in on that too, accusing Republicans on the House Select Committee of being “obstructed” when trying to uncover new information on former Secretary of State Hillary Clinton, whom he accused of feigning “diplomatic illness” to avoid testifying.

He also has a relationship with anti-Muslim extremists Pamela Geller and Robert Spencer.

Geller endorsed Bolton when he was President Bush’s pick for U.N. ambassador, and Bolton penned the forward to the 2010 book Geller and Spencer wrote.

Moreover, Bolton chairs the anti-Muslim Gatestone Institute, purportedly “dedicated to educating the public about what the mainstream media fails to report.” It has disseminated the debunked claim that ensconced within certain cities are “no-go zones,” Muslim-dominated neighborhoods off limits to non-Muslims.

Unlike McMaster and outsed Secretary of State Rex Tillerson, who tried to temper Trump’s impulsivity, Bolton is expected to exploit it, stoking further military aggression.

“I don’t expect him to be a very tempering influence. I would describe him as being extremely hawkish, especially with regard to military instruments, but also coldly calculating and rational. He is sort of like Dick Cheney in a lot of ways.”

Trump stated today he would decide in 48 hours how to respond to the Syrian chemical attack.

With John Bolton at his side, his initial decision to withdraw seems unlikely. 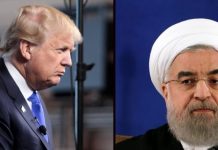