With days to go before Donald Trump must decide whether to re-certify the Obama-era Iran nuclear deal,  the president is making sure we’re as distracted, divided, and deceived as we were fifteen years ago when former president George W. Bush lied us into the war in Iraq.

In an effort to discredit the landmark diplomacy, Trump officials contacted private investigators last May to “get dirt” on the two men.

“These are extraordinary and appalling allegations but which also illustrate a high level of desperation by Trump and [the Israeli prime minister] Benjamin Netanyahu, not so much to discredit the deal but to undermine those around it.”

“The idea was that people acting for Trump would discredit those who were pivotal in selling the deal, making it easier to pull out of it.”

According to documents, the private intelligence agency responsible for hiring investigators told those investigators to delve into personal details about Rhodes and Kahl, specifically personal relationships, involvement with Iran-friendly lobbyists, and personal or political benefits the peace deal might earn them. Investigators were also instructed to contact prominent Iranian Americans and journalists favorable toward the deal, like the New York Times, MSNBC, the Atlantic, Vox, and the Israeli newspaper Haaretz, among others, to attempt to ascertain whether Rhodes and Kahl had shared sensitive information.

Neither Rhodes nor Kahl were aware they were being investigated.

“I was not aware, though sadly am not surprised. I would say that digging up dirt on someone for carrying out their professional responsibilities in their positions as White House officials is a chillingly authoritarian thing to do.”

Trump has on numerous occasions threatened to scrap the 2015 deal that has kept nuclear weapons out of the Iranian government’s hands, labeling it “the worst deal ever.”

In January, Trump accused Obama of having “curried favor with the Iranian regime in order to push through the disastrously flawed Iran nuclear deal.”

On Monday, Benjamin Netanyahu accused Iran of continuing to conceal and expand its nuclear weapons capabilities, claiming “new and conclusive proof” of violations.

Citing possible war if the agreement falls apart, United Nations (UN) Secretary Aeneral Antonio Guterres urged Trump on Thursday not to turn his back on the deal.

That all started in 1999 when Bush was still governor of Texas.

He reported to journalist Mickey Herskowitz:

“One of the keys to being seen as a great leader is to be seen as a commander-in-chief…My father [former president George H.W. Bush] had all this political capital built up when he drove the Iraqis out of Kuwait and he wasted it…If I have a chance to invade…if I had that much capital, I’m not going to waste it.  I’m going to get everything passed that I want to get passed and I’m going to have a successful presidency.”

“Suddenly, he’s at 91 percent in the polls, and he’d barely crawled out of the bunker.”

Two years later the United States invaded Iraq, a country that had no hand in the fateful attacks, and posed no existential threat to our nation’s sovereignty.

After insisting on the campaign trail he was opposed to the Iraq war (he wasn’t), is Trump about to get us into another similar confrontation that will bog us down in the Middle East for generations to come?

And this time with a disgruntled nuclear power, no less. 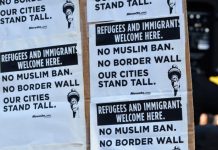 For All of Biden’s Progress, Is Immigration His Achilles’ Heel? (Video)