Just as Donald Trump was arriving at Windsor Castle to gaslight Great Britain as he did NATO this week, Special Counsel Robert Mueller delivered a dozen fresh indictments against Russian intelligence officials for hacking and leaking senior Democrats’ emails during the 2016 presidential election campaign.

To date, Mueller’s team has presented more than 100 criminal counts against 32 people and three companies.

Those charged were operatives of GRU, the Russian Main Intelligence Directorate. Rosenstein stated they had “corresponded with several Americans through the internet,” including a Trump campaign associate.

That associate is possibly Roger Stone, who previously admitted he had exchanged messages with one of the indicted individuals accused of being a Russian intelligence front. Stone denied knowing his true identity.

Stone told The Guardian on Friday his correspondence regarding the hacked documents was “benign based on its content, context and timing,” and “provides evidence of no collaboration or collusion.”

“Russian GRU officers hacked the website of a state election board and stole information about 500,000 voters. They also hacked into computers of a company that supplied software used to verify voter registration information…The defendants worked for two units of the GRU [that] engaged in active cyber operations to interfere in the 2016 presidential elections.”

According to Rosenstein, using spearfishing tactics, one unit stole information and hacked into computer networks where they “installed malicious software that allowed them to spy on users and capture keystrokes, take screenshots and exfiltrate or remove data from those computers.”

Donald Trump has been doing everything he can distract and deflect the public from any revelations the Mueller investigation may elicit, including signing-off myriad tweets with “no collusion” and discrediting the intelligence apparatus.

There is already too much smoke for him to insist there is no fire. 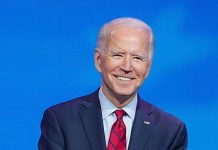 Under Biden, 5.6 Million Jobs Created and Historic Drop in Unemployment