Fortunately, none of the bombs detonated, but had they done so, Sayoc could have perpetrated one of the worst acts of domestic terrorism in the nation’s history against individuals the president has dubbed  “scum,” “dishonest,” “not good people,” “sleazy,” “fake news,” and “among the worst human beings.”

What Sayoc could have fomented, however, would not even have come close to the attack on Democratic members of Congress and well-known media personalities a neo-Nazi lieutenant in the U.S. Coast Guard was discovered on Wednesday to be plotting.

When law enforcement converged on his Silver Spring, Maryland home, they found and seized 15 guns and 1,000 rounds of ammunition.

Court documents confirm Hasson identified as a white nationalist and had been researching the manifesto of far-right Norwegian mass murderer Anders Breivik, who killed 77 people in a 2011 attack, for “focused violence” to create a “white homeland.”

“I am dreaming of a way to kill almost every last person on the earth. I think a plague would be most successful but how do I acquire the needed/Spanish flu, botulism, anthrax not sure yet but will find something.”

His online history shows him referring to a “liberalist/globalist ideology” destroying white Americans and conspiracies by “((((People)))),” an internet styling the far right uses to refer to Jewish individuals.

He also apparently inquired online about whether congressional lawmakers and supreme court justices are under Secret Service protection.

Hasson’s home contained bottles of human growth hormone, and he apparently scoured Anders Breivik’s manifesto for references to steroids, which Breivik ingested while planning his massacre.

Could Cesar Sayoc and now Christopher Hasson’s planned domestic terrorist massacres be our own modern-day Kristallnacht?

As Andrew Gawthorpe writes in The Guardian:

“Political violence in the United States has tended to come in two forms. The first consists of simply unhinged acts, like John Hinckley Jr shooting Ronald Reagan in the hope of impressing the actress Jodie Foster, or Timothy McVeigh hoping to bring down the government with a bomb. The second is more systematic and sinister: the violence used to keep down groups who threaten the social and political order. This is the violence of strikebreakers and the KKK…This was violence of the people, by the people, for the government.

“This is the correct context in which to understand the bomb scares that have recently affected Barack Obama, the Clintons, Eric Holder, George Soros andothers. We don’t yet know the state of mind of those responsible. But the identity of the targets chosen (primarily women, African Americans and a Jew) and the fact they are all known enemies of the president of the United States tells us something deeply disturbing about the state of America today.”

Trump refers to his political opponents as “globalists” who “want the globe to do well, frankly, not caring about our country.”

Those “globalists,” according to Trump, support “caravans” of “unknown Middle Easterners” en route from Central America to wreak havoc on American sovereignty.

When it comes to elections, says Trump, the “globalists” depend on millions of non-American “illegals” showing up in droves to vote.

He told “second amendment people” they might be able to take care of Hillary Clinton.

There is even reason to believe adult film actress Stormy Daniels’ arrest in Columbus, Ohio this summer was politically motivated due to Daniels’ outspoken criticism of the president.

And although there may not be any connection between Trump and the gunman who opened fire on a Pittsburgh synagogue in October, killing 11 and wounding six, as Gawthorpe wrote:

“It is no surprise that this febrile atmosphere, in which any lie can be justified if it paints the president’s opponents as traitors, would lead to violence.”

When commenting about the synagogue shooting, Trump, predictably, stated:

This is what we can expect from a man identified himself as a “nationalist,” encouraging former Ku Klux Klan leader David Duke to tweet:

“Trump Embraces Nationalism in a Massive JamPacked 99.9 % White Venue in Houston! Zio Journalists asked him if this is White Nationalism! Of course fundamentally it is as, there is no ethnic or racial group in America more Nationalist than White Americans… So What’s the Problem?”

No, Trump is not outright calling for journalists and his political opponents to be harmed and/or killed. He is not overtly calling for Muslims, African Americans, LGBTQ Americans, immigrants (mostly dark-skinned ones), or Democrats to be maimed.

But over the past several years, his stochastic terrorism has successfully incited ardent supporters to fill in the blanks.

He hasn’t yet proved us wrong.

We probably shouldn’t expect him to.

So far, Trump has said nothing about Christopher Hasson or the ideology that corrupted him enough to nearly enact his plan.

Instead, Trump took to Twitter to lambast actor Jussie Smollett for “racist and dangerous comments.”

Right-Wing Extremist Groups Fight to Turn Back the Clock 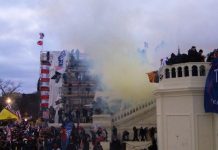 Another Day in America Means Another Mass Shooting