By now, we are well aware of 32-year-old Heather Heyer’s death at the Unite the Right rally in Charlottesville, Virginia on August 12.

But there were other violent skirmishes that day that have received far less media coverage, specifically the attack of Deandre Harris, 20, whom video coverage shows six men cornering and beating in a parking lot mere yards from police headquarters.

Now two men featured in the video chronicling Harris’s assault have been arrested, and police are still searching for a third.

Saturday, police arrested Richard W. Preston, 52, a imperial wizard of the Ku Klux Klan, for discharging a firearm within 1,000 feet of a school. He was captured on video shooting at the ground near Harris’s friend, counter-protester Corey Long.

About the incident, Long said:

“At first it was peaceful protest until someone pointed a gun at my head. Then the same person pointed it at my foot and shot the ground.”

Police have also released a wanted poster for Alex Michael Ramos, 33, of Marietta, Georgia, for the same offense as Borden.

Malicious wounding carries a sentence of up to five years in prison. Discharging a firearm within 1,000 of a school is given two to ten years.

The attack on Harris and Long started after white supremacists attempted to impale one of Harris’s friends with a flagpole, which Mr. Harris tried to deflect. Over a dozen men then rushed Harris, forcing him to the ground.

The Virginia American Civil Liberties union (ACLU) submitted the video documenting this to the FBI and local law enforcement.

Although their arrest is good news, questions remain over how a planned protest supporting Confederate monuments that was supposed to provide ample police protection was able to get to this point.

Police request anyone with knowledge of Alex Michael Ramos’s location to call 434-970-3280. 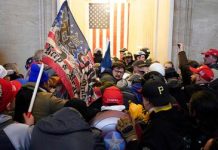 The Double-Standard of the Attempted Capitol Coup (Video)